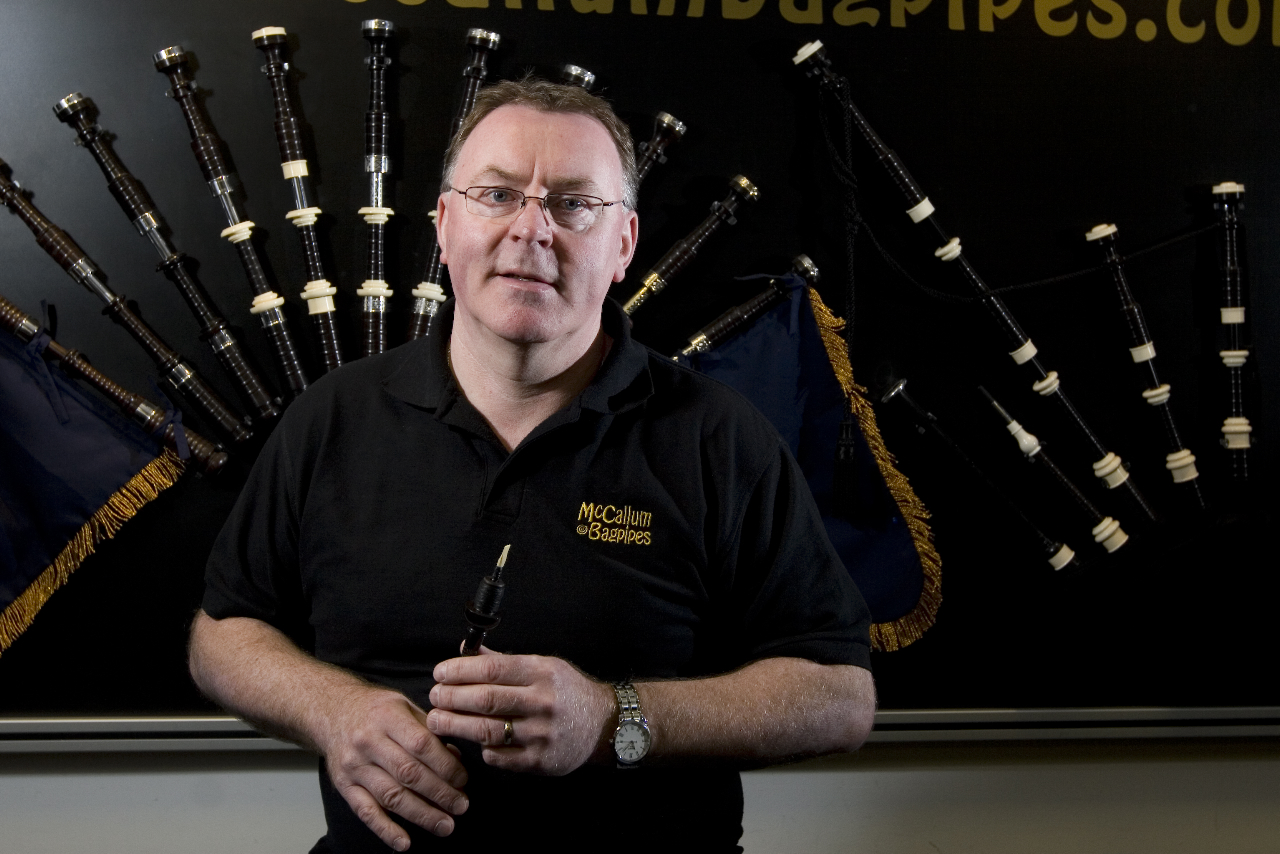 A native of Campbeltown, Kintyre, Willie received his main tuition from his uncles Ronald and Hugh and also came under the guidance of another relation, his 2nd cousin P/M Ronald McCallum, MBE. These gentlemen were all champion pipers. The McCallum family can trace their piping directly back to John McAlister who won the prize pipe in 1782 at the Falkirk Tryst.

Willie has been competing in piping competitions since 1973 and in the period 1973-1979 amassed an impressive number of wins in junior under 18 events, including the Scottish Junior Championship on two occasions.

Upon turning to open piping in 1979, he won his very first professional contest, the Piobaireachd event at Inveraray Highland Games against some of the finest competitors in Scotland. That year he followed that up by taking 2nd prize in the Silver Medal at the Argyllshire Gathering.

He was a member of the successful Grade One Pipe Bands Babcock Renfrew, British Caledonian Airways and Scottish Power. During that time he enjoyed several Pipe Band Championship wins and worked with some of the most successful Pipe Majors in the history of pipe bands. Willie is currently a member of the Grade 1 Spirit of Scotland Pipe Band, an ‘all-star’ band who compete every so many years.

He has been in demand for a number of years as a tutor and recitalist at home and abroad and in recent years, his students themselves have gained almost all the major prizes, including the Gold medals at the Northern Meeting and Argyllshire Gathering, the Clasp, Glenfiddich, the Silver Chanter, Former Winners MSR, Metro Cup. All these are champion of champion titles which Willie had won himself. Several of his United States students have won major prizes in the last few years.

His commitment to teaching has now been over 30 years, initially in his spare time and holiday time but now he has made this a major part of his working life. Willie gave up his position as a Treasury Accountant at the University of Strathclyde in late 2010 to pursue a full-time career in piping. That career involved teaching individuals, teaching group workshops, and pipe bands. He has taught in the USA, Canada, Australia, France, Italy, Brittany, Austria, Germany and Switzerland, since the end of 2010.

Whilst at the University he was instrumental in setting up a series of bagpipe and drum workshops and concerts the week of the World Pipe Band Championships, a series which quickly became a focal point for the week. Although relatively small, it was a spark of an idea taken forward by the National Piping Centre, which blossomed into Piping Live!, which has become a major International Piping Festival held that same week.

He has played for HM Queen Elizabeth at Balmoral Castle, as well as regularly for HRH Prince Charles.

In 2019, Willie was appointed by the National Piping Centre as Lead Bagpipe Tutor on the prestigious Bachelor of Music Education Degree which is run by the Royal Conservatoire of Scotland.

He is Co-ordinator of a new series of workshops and lectures run at the Piping Live! Festival in Glasgow, named Learn@Live. He also organises, and has done for 20 years, one of the solo piping  calendar highlights, The Alasdair Gillies Memorial Recital, now run as part of Piping Live!

Willie runs a piping business (Willie McCallum Piping) launched in 2007 selling mainly his own McCallum Solo Pipe Chanter (McC² Solo Chanter) , and is also an agent and product consultant for McCallum Bagpipes Ltd. In addition to this, he is also a consultant to the worlds largest pipe bag makers Bannatyne Ltd, adding his expertise to pipe bag design and moisture control.

Willie is known as a meticulous piper in terms of his preparation, technique, interpretation, and his instrument. It is evident that he has taken this approach into his teaching. He is a fierce and unflappable competitor at the same time known as an extremely level-headed and sporting competitor amongst his fellow competitors.

Willie lives in Bearsden with his wife Christine and children Hailey and Scott.